Ohio Surgeon Who Wrote His Own Colorful Obituary Dead at 48 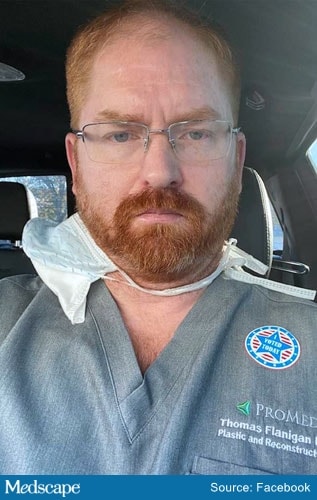 The family of Ohio surgeon Thomas Lee Flanigan, 48, who passed away last week, published the obituary he wrote himself and praised his “shocking and unexpected but fabulous exit.”

Flanigan, who referred to himself as the “ginger god of surgery and the shenanigans,” wrote, “Yes, I teamed up with Princess Diana, John Belushi and Steve Irwin the crocodile hunter when I was at the top of my game as iconic Superhero who seemed almost too good to be true. “

The obituary made no mention of what led to the death on April 27 of Flanigan, a husband and father of three who served on two tours for the U.S. Army on combat missions and received the rank of lieutenant colonel.

A ProMedica health system media representative told Medscape Medical News that the family had confirmed that he suddenly died of “an as yet undetermined medical problem.”

Flanigan, born in 1972 on Halloween, worked at ProMedica Physicians Plastic Surgery in Sylvania, Ohio, and at three other locations. He specialized in hand surgery as well as plastic and reconstructive surgery.

ProMedica residents were told after his death that Flanigan had been hospitalized a few days before his death.

In his obituary, Flanigan made strong references to his wife Amy and children Joey (14), Evelyn (13) and Sylvia (10).

“Please take good care of them like the priceless treasures that they are,” he wrote.

Sarah Hill, MD, a third year surgeon who worked with Flanigan, tweeted that the field “has lost a force of nature.”

She writes: “Dr. Flanigan taught us all to give family priority, act with confidence, value in ourselves, and enjoy the journey.

Surgery has lost a force of nature. A source of endless barely-appropriate humor, dad jokes, honest advice, and patient advocacy, Dr. Flanigan taught us all to prioritize family, operate with confidence, place value in ourselves, and enjoy the journey. https://t.co/lhvPAum87y

“In his memory, we will continue to nurture new and aspiring members of the House of Surgery, support each other and our juniors, and create laughter when we can’t find it,” writes Hill. “Big thanks and greetings to the ginger god of surgery and shenanigans. We’ll keep the lights on in the church.”

Hill told Medscape Medical News that she didn’t know Flanigan was hospitalized a few days before his death. The close-knit hospital group was given the news the morning after his death.

She said at first that she was surprised that he wrote his own obituary, but when she thought about it, she said, “It was very fitting.

“I’m not surprised that he was very specific about how he wanted to be reminded. I don’t think the idea of ​​someone writing a serious, grumpy, sad obituary for him would have suited him well,” she said said.

He was a fierce advocate for the patients and the residents who worked with him, Hill said. He hosted a support group for his patients undergoing mastectomy.

“He was extremely protective of these patients,” she said.

His family “was his world,” she said. “Every time he talked about his children, his eyes lit up.”

Flanigan said his life was “a great run”. He said credit was due not only to his immediate family, but also to Northern Michigan University, the brothers of Lambda Chi Alpha, Wayne State University Medical School, which he graduated from in 2003, the Army and “colleagues, various.” Celebrities, random “cartoon characters, people who make memes, Russians, and other friends and family. “

Flanigan was “humble” and “compassionate,” Despina Walsworth, MD, with Beaumont OB / GYN Associates of Dearborn, Michigan who was in her senior year at Wayne State in Detroit, Michigan, told Medscape Medical News. She said he helped her through her personal problems in medical school.

She said he was always fun and motivated, initially determined to be a trauma surgeon and later changing specialties.

One patient commented on the obituary for his surgical skills, as demonstrated in her recovery from an attack on a dog years ago: “Dr. Flanigan was a miracle worker and my arm looks amazing after his work. I can never thank him enough.”

A wake is scheduled for May 6 in Toledo, Ohio, followed by a private family reunion the next day.

Flanigan left one last word for everyone: “Due to the unknown and cosmic nature of my next mission, this will be our last communication. It will self-destruct in five minutes.”

“My whereabouts are now top secret, but let’s just say I’ve made some new friends by the names of Elvis and Kenny. Tom’s church is closed, but please keep worshiping me, light candles, and send money.” You know the deal. “

Marcia Frellick is a freelance journalist based in Chicago. She previously wrote for the Chicago Tribune and Nurse.com and was an editor for the Chicago Sun-Times, the Cincinnati Enquirer, and the St. Cloud (Minnesota) Times. Follow her on Twitter at @mfrellick.