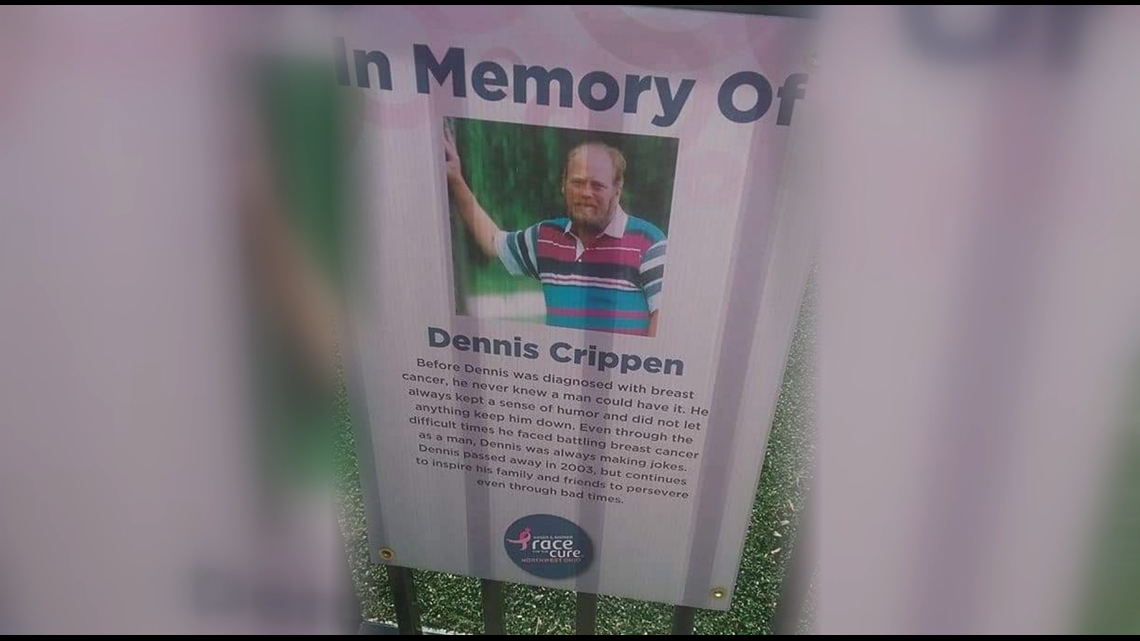 Kelly Crippen and Denise Smith want to make men aware of breast cancer in honor of their father Denis Crippen, who died in 2003.

TOLEDO, Ohio – “Men get breast cancer too.” This is the message two local women want to spread the word after their father dies.

As the Susan G. Komen Foundation continues to invest more in research for men with breast cancer, this year’s Toledo Race for the Cure will remember Dennis Crippen.

“He was funny. He was a prankster,” said Denise.

And it was this joking ghost that Kelly and Denise say their dad took away the seven years he spent battling breast cancer, a disease almost unknown in men when he was diagnosed in 1996.

Denise said the doctors didn’t discover the cancer until her father noticed he had an inverted nipple and then pain. He waited six months to have it checked.

Dennis had a mastectomy, radiation, chemotherapy, and other treatments and procedures traditionally designed for women. Dennis always joked about that.

“All of the drugs and stuff he was taking for chemo had never been tested on men. So he came home and told me his period was going to be late. He shouldn’t try to get pregnant while on these drugs shouldn’t be … breastfeeding, “said Denise.

Dennis was in remission for four years. Then doctors found a tumor in his throat. The cancer had spread to his prostate, kidneys, and bones.

Dennis died in 2003, just weeks before his 53rd birthday.

“I miss him every day. I have a 10-year-old son who will never meet his grandfather,” said Kelly.

“Not a day goes by that I don’t think about him,” added Denise.

Kelly and Denise got matching tattoos in honor of their father, a man who worked on the railroad and loved to ride a motorcycle – activities Kelly learned for him.

“There’s a freedom to be on the bike and I could understand why he loved it,” said Kelly.

His daughters said that while Dennis was funny and a biker, he was also shy and private. They joked that he might be a little mad at them for nominating him for the Race for the Cure’s “In Memory of” award.

But they want him to know something else.

“I would tell him I nominated him because I was proud of him. The way he handled everything,” said Kelly.

Kelly and Denise also want to raise awareness of breast cancer in men.

“Men get breast cancer too. We learned the hard way as a family what this disease does to people,” said Kelly.

Denise said that there has been progress since her father died and she and her family will continue to support Comen’s mission to fund more research and find a cure.

“They have their own mammography machines now. They come out with their own breast cancer tape. I hope they will do more tests on the chemo drugs they use. Because like I said my dad did I don’t know” said Dennise.

You can check breast cancer symptoms and resources here.

MORE RACES FOR THE CURE STORIES:

2020 Komen Race for the Cure in Toledo celebrates Sheryl Wingate