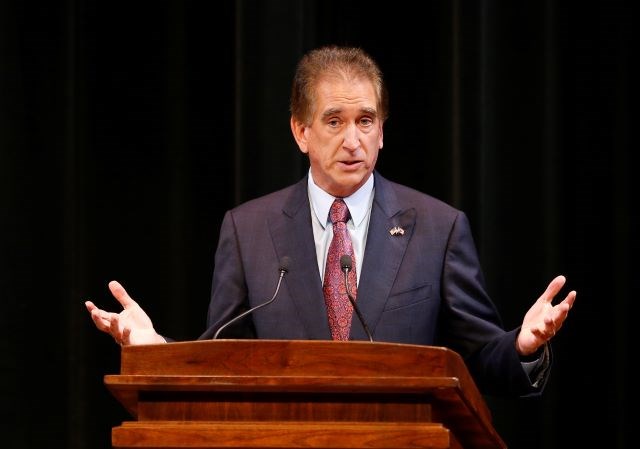 “I wouldn’t have done a lot of the draconian things that I believe the governor to do. [Mike] DeWine did it, ”said Jim Renacci, who challenges DeWine in the governor’s primary. “Let’s face it. It closed very quickly. He relied on a health director to scare people. We should never scare people.”

CLEVELAND – Jim Renacci, who is pursuing the Republican nomination for Ohio governor, said his challenger Governor Mike DeWine overreacted by closing Ohio early in the COVID-19 pandemic and said it did more harm than good.

Renacci, a former congressman and businessman, spoke to the City Club of Cleveland Friday about his vision of moving Ohio forward, the Toledo Blade reported.

The GOP primary candidate also spoke about the importance of allowing parents to choose what is best for their children, as opposed to state or school mask and vaccination regulations.

“I wouldn’t have done a lot of the draconian things that I believe Governor DeWine did,” Renacci said of the pandemic. “Let’s face it. It closed very quickly. He relied on a health director to scare people. We should never scare people.

“We should have talked about it, yes, we have a contagious disease. Yes, there are concerns, but it scared people,” said Renacci. “I think this governor overreacted. I think he did [New York Gov. Andrew] Cuomo of Ohio. “

The latest state COVID-19 guidelines for K-12 schools strongly recommend vaccination and masking, as well as social distancing for the unvaccinated.

Renacci also accused DeWine of rampaging corruption at the Ohio Statehouse and criticized his connections with his appointed chairman of public utilities, Sam Randazzo, who was brought up during an FBI investigation into a $ 60 million bribery scandal involving FirstEnergy Corp. resigned from Akron.

“If [DeWine] wants the state of No. 1 to change [in] Corruption at number 50, where we should be – and zero corruption, he has to come out and make these changes, “said Renacci.” He doesn’t even talk about it.