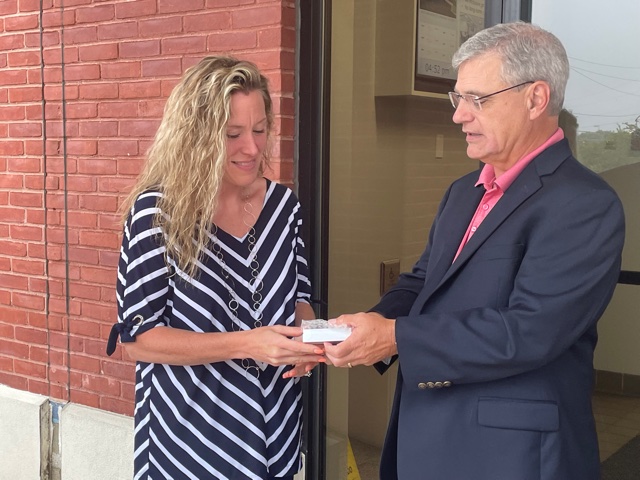 Change and persistence are the hallmarks of pregnancy counseling centers (PHCs). Change, because in order to meet the needs of customers in a constantly changing culture, centers have to keep pace. Persistence is vital to fulfilling the tremendous commitment that comes with serving the most vulnerable in our society and their mothers and fathers.

Heartbeat of Toledo has a 50 year track record of modeling effective change and consistency.

Heartbeat International, the largest network organization supporting PHCs internationally, recognized the achievements of Heartbeat of Toledo with the Legacy Award at their annual 2021 pregnancy assistance conference in Columbus, Ohio in April.

Heartbeat of Toledo has continuously changed its offers over the years in order to continue to live up to its mission statement:

“Heartbeat of Toledo is a life-affirming organization whose mission is to be the best source of information and support for women who are pregnant and to help mothers, fathers and babies in need.”

“We recently had a woman named Julie who was a ‘Your First Look’ patient in the 1980s who came to us to share her story,” she said. “She held a photo of her family with her grandchildren and let us know that a whole generation of people had been born out of their life choices at that time, supported by Heartbeat of Toledo.”

“It reminded us of the intergenerational influence, opportunities and responsibilities we have to serve our community,” said Palacios. “We are grateful that we have remained true to our mission and served our community for 50 years.”

Representatives of the Pregnancy Medical Clinic, which first started operating in the Toledo area in 1971, were unable to attend the event International Heartbeat Conference in April, and so members of the Heartbeat International leadership came to Heartbeat of Toledo to present the award in a belated ceremony on July 11th.

The highest award from Heartbeat International

Betty McDowell, Vice President of Heartbeat International Ministry Services, commented on the importance of the award.

“The Legacy Award is the highest distinction Heartbeat bestows on people or, in your case (Heartbeat of Toledo), on an organization that recognizes your commitment to the mission and has an impact that will be honored and remembered.”

McDowell continued, “Heartbeat of Toledo best represents the incredible effects of pregnancy aid when you serve 50 years of mission and change the lives of women, children and families. Your organization has such a rich history that we are so grateful for. “

Heartbeat of Toledo began as a birthright in May 1971 when the founders, Dr. John F. Hillabrand and Mrs. Elenore Maier, along with a group of supporters, recognized the need for pregnancy emergency services in Toledo.

The birthright model had its origins in Canada a few years earlier, and pregnancy relief pioneers such as Hillabrand and Maier tried to offer help to women in the United States and began adopting the birthright model. Later, when hotlines and other services that were neither part of this model nor were allowed in the organization’s statutes were introduced, the founders of Heartbeat of Toledo realized that a franchise model did not apply. Heartbeat of Toledo became the new name in October 1971.

The vision for an “Association of Independent Service Providers”, the Become Heartbeat International in November 1971.

Maier, a Holocaust survivor, had pondered the connection between abortion and her experience in saving many women and children from Nazi oppression. Maier wrote about “deadly inhumanity”, that it “takes its toll not only from the victim, but also from the oppressor, as well as from those who are inactive or helpless in silent toleration”.

“And it is the same with abortion,” continued Maier. “The victim loses every time. The abortionist becomes emotionally distant and insensitive to the value of human life. The viewer, even if initially interested and concerned, can grow weary of the controversy and succumb to the semantic gymnastics and shrewd delusions of proponents. “

Maier also said: “If we are not for life, we are against our own survival.”

Their 1971 concerns turned out to be a grave reality unleashed on the United States in 1973 in the Roe v Wade Supreme Court ruling to legalize abortion nationwide.

A long legacy of service to women and families

Dr. Hillabrand helped Maier build a small office with free pregnancy tests in connection with his medical practice at a time when pregnancy tests were being sent to medical labs for results. Maier ran the center together with a nurse from Hillabrand’s practice, Esther Applegate. Other volunteers also provided services.

A second Heartbeat location in South Toledo was opened in 1988.

In order to keep pace with changing customer needs, free ultrasound examinations, STI tests and option consultations were launched in 2006.

Heartbeat of Toledo has been offering early pregnancy ultrasound scans since 2011 as part of the Your First Look, Women’s Center program.

The model of using volunteers for the centers staff continued until 2009 when the first paid staff was added. Today there are 15 paid employees and 20 volunteers who look after around 2,000 families annually.

Pregnancy and parenting services are provided by Heart to Heart, which provides material assistance, courses and resources to both expectant and new parents.

In 2016, the center began offering adoption specialist appointments for those considering adoption. Sharing Hearts is a biological adoptive parent support group offered to those who have placed a child in an adoptive family. They provide vital support once the baby is born.

To serve fathers, Heartbeat of Toledo partnered with Tribe of Dads this year to help men become better fathers. The program offers mentoring, education and communication. The Facebook group alone has over 7,600 members.

Heartbeat International President Jor-El Godsey noted that Heartbeat of Toledo received the Legacy Award while celebrating 50 years of gestational care in a movement that is also celebrating five decades.

“In honor of Heartbeat of Toledo, we not only recognize their spirit-filled tenacity and missionary focus, but we celebrate a movement that is just beginning to reach 50th anniversary milestones,” said Godsey.

In speaking with PHC staff and volunteers over the years, Godsey said that there was always a challenge, and that was the continuous change he called “standing to serve.”

“The Heartbeat of Toledo is evidence of a pregnancy care movement that continues to grow, reach out to serve, and with intent to have an impact on the future,” concluded Godsey.

Tweet this: Heartbeat of Toledo is evidence of a pregnancy support movement that continues to grow, stretch to serve, and aim for future impact

Adapting quickly and adapting to needs is key to a PHC that continues to serve women and families, and part of how Heartbeat of Toledo has forged its legacy.

“We are forever grateful to those who came before us for flowing into Heartbeat of Toledo and creating the amazing space for women and families we have today,” said Palacios. “We honor our history, the programmers, donors, volunteers and staff who own a piece of us today.”