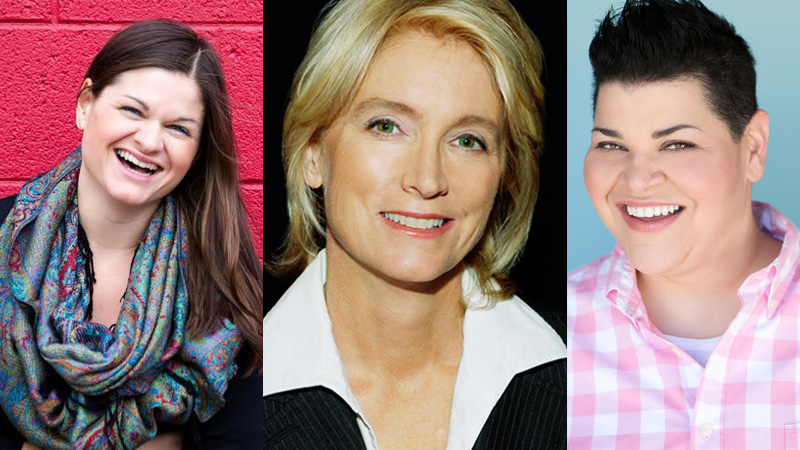 (LR) Brooke Cartus, Poppy Champlin and Jen Kober will go to the Toledo Funny Bone on Tuesday May 2nd as part of The Queer Queens of Qomedy Tour.

There has been a long-held rumor that lesbians are not funny – but like most rumors, the truth is not difficult to uncover. Just talk to a real lesbian like a seasoned comedian come Poppy Champlin.

Champlin, who has appeared on Showtime, LOGO, VH-1, Comedy Central, and Oprah, and is America’s Funniest Real Woman on the Joan Rivers Show, goes on a hit tour of the Midwest with two other lesbian comedians. The queer queens of Quomedy.

Before her first visit to Toledo, we spoke to Champlin about how she spent two decades breaking the humorless lesbian stereotype.

TCP: Your humor has a strong focus. As a lesbian comedian who tells jokes about being a lesbian to a predominantly lesbian audience, you are often viewed as a niche comedian. Is that a choice or the natural result of your being?

Poppy Champlin: After winning America’s Funniest Real Women on the Joan Rivers Show, I went to Los Angeles thinking I had to do a sitcom. I had an agent and he wanted to make me a big star, but then he went to the insane asylum. It was sad. I lost the first agent who saw ‘me’ for ‘me’.

Then everyone kept asking what my inclination was. I would just say, “‘I don’t know, I think I’m just being funny.” Everyone told me to get a point of view and finally I said, “Well, I’m gay. How about that? ”- and it worked. The gay community picked up on what I did, so I started writing for them.

I much prefer to write for gays because I’m gay and because gays understand my humor. But lesbians understand it even more. And I have to tell you, there is a huge difference between the humor of gay women and gay men. So, really, I made a living working for lesbians.

How much have you adjusted yours?
Humor after coming out?

My entire career has been focused on mainstream straight jokes made in male-dominated spaces. The main thing was to make the straight men laugh so I could keep getting booked. Granted, those jokes were great, and they’re still some of my strongest jokes. It was a good testing ground and made me write really strong jokes, but I didn’t really enjoy having to hide my gender preference. I wasn’t really out until 2000.

Have you been out and about in your private life?

I was out with my friends and everyone knew it, but when I got on stage I was still pretty closed off. My mom hates that I’m gay and has always reprimanded me for it, so I have an internal homophobia that I deal with. I also want to be liked by everyone. It was such a grueling game until I finally said, “Fuck it.”

What did you do to pretend you’re straight?

I said “my friend”. I just had to change the pronouns in my jokes. I don’t drink anymore, but back then I drank with people afterwards. We got drunk and went back to her room to get high. At some point I had to say I got out, but I would never come back. 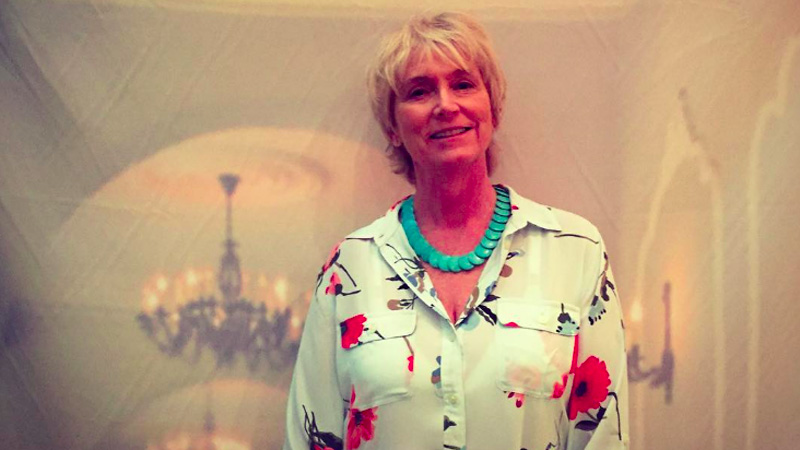 Did this manager in LA encourage you first?
you come out?

James Masada of the Laff Factory in LA used to say, “Why don’t you do your ‘gay thing’? Why don’t you talk about being gay? ”I’d say,“ Hey! Don’t tell me what to do I don’t want to go out yet. “I just wanted to be the next Ellen DeGeneres and not really make people think I was gay. I should have taken his advice and just did it sooner.

Do you think it would have been easier?
(come out) today?

Well, I don’t want to be a comedian now, male or female. I think it would be really difficult to get a solid foundation right now. I don’t go out much to open microphones, but I remember how exhausting and tedious it was to find them and then put on a show in front of your co-workers when everyone is doing the same thing as you. Besides, I don’t know what’s in Stealing and joke stealing is going on. There are no rules, no laws. And with this president we now have … lying is an art. So it seems like it is very difficult now.

How was the experience of being gay?
for the other women on your tour?

Jen Kober, the headliner, is in her late 30s and is doing really well. She was up Sitting while standing with George Lopez, Twisted Tuesdays with Kevin Hart. Your acting gets really sharp too. She was in an episode of Control your enthusiasm and in the movie Anger management. She also goes on tour NPR’s quick judgment, they’re just comedians telling stories.

Brooke is a Columbus, Ohio comedian in her 20s. I did this tour in Cincinnati last year and it worked out really well so I decided to crown her queen this year.

This age range creates different generations of lesbians. Do you talk to them about the decision to joke about lesbians?

In all honesty, they don’t think about it. They just incorporate being a lesbian into their jokes. It’s not a big deal. Jen is just a comedian who happens to be gay. Brooke is more of a feminist activist, and that’s what brings her to the show.

It’s definitely a derogatory word, but I’m interested in winning it back. I want to take back such words and desensitize people to their pejorative effect. I also found three Q’s in the title cute.

All proceeds from the show will benefit Equality Toledo.
After the Toledo Show, the Queens head to Columbus (May 3rd) and Dayton (May 4th).

$ 25 / general admission. $ 40 / VIP tickets that include preferred seating and a pre-show meet up with the comedians.
19 o’clock. Tuesday May 2nd
The funny bone of Toledo
6140 Levis Commons Blvd., 419-931-3437.
toledo.funnybone.com | queerqueensofquomedy.com
| poppychamplin.com 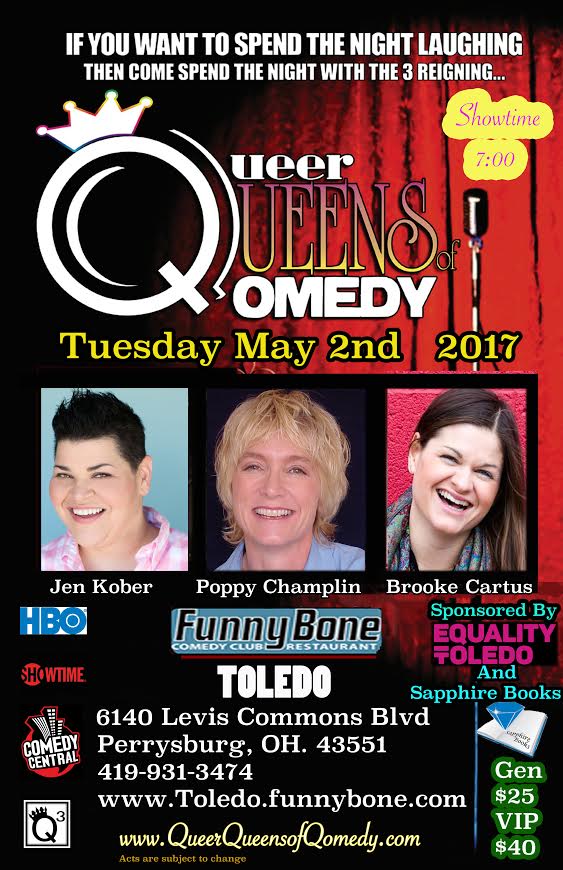