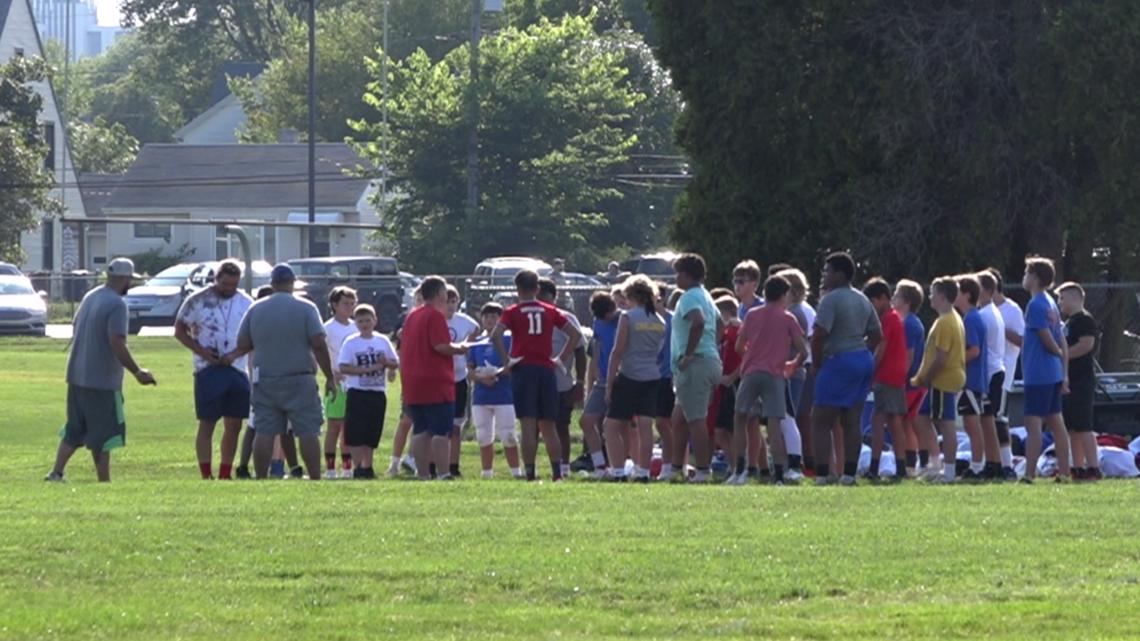 The hot weather has led many of us to choose more climate-friendly activities. But if you’re someone with a kid into an outdoor sport, that’s not an option.

TOLEDO, Ohio – The hot weather has led many of us to choose more climate-friendly activities. But if you’re someone with a kid into an outdoor sport, that’s not an option.

Any team doing something outdoors had moderated the activity for safety reasons.

“I’d rather play it safe than come here and let these students test their limits. So, you know, we made that decision. I contacted Anthony Wayne’s John Snyder and we had a quick chat together and it was … very easy to say let’s be 30 minutes late, “explained Edgell.

While the goal was to get the students in cooler temperatures, players like Anthony Wayne’s senior footballer Patrick Arnold weren’t upset about the delay, but argued that the heat was going nowhere.

“I’m pretty happy, but I don’t really see the point. It’s still getting hot. I think it’s getting darker so it’ll be nice,” said Arnold.

But Edgell pointed out that it will make a difference.

“On our wet-bulb test, we scored 92.1, which means any outdoor activity will be canceled or delayed. We’re still at high risk levels now, but on the wet-bulb test, we’re below 88 degrees with two full hours of limited exercise Equipment, “said Edgell. “Out here at the football games tonight, we take breaks in every half, so the 18-minute mark for JV and the 20-minute mark for university.”

The Wet Bulb Test used by the National Weather Service measures the heat load in direct sunlight, taking into account: temperature, humidity, wind speed, sun angle and cloudiness and ultimately measures how hot is too hot.

Edgell, along with Mercy Health’s athletic trainer Alyssa Lassey, agreed that the 30 minute push back caused enough temperature drop to be safe for play and practice. Neither support playing through the heat.

“Over the summer there were several deaths from heat illness that I know across the country,” Lassey said. “[Those schools] don’t have the right tubs and refrigerators to keep the kids cool. “

Lassey argued that heat stroke and heat sickness are medical emergencies that should not be taken to the hospital without cooling as much as possible, as it can be fatal. This also applies to the parents in the stands.

“Cooling towels, I see some umbrellas. You need to get up and move too,” added Lassey.

During training and games, the parents took shelter where they could. Many wore sun hats or caps, carried umbrellas or stood next to the stands. Soccer mom Jennifer Mercurio watched her seventh grader Jonas Mercurio under a nearby tree.

While seventh and eighth graders practiced without equipment, Lassey said students could practice with equipment but should take extra breaks

Mercurio explained that Jonas knows how to stay hydrated and exercise himself. You have been coming to soccer games and training for four years. Although it’s hot and exercising in the heat doesn’t seem attractive, exercising is still important.

“You signed up for a team. This is something you want to get good at and that means being in the heat,” said Mercurio.

That’s why the sport doesn’t stop just because it’s hot. Administrator and parent agree, you just have to play it safe.

RELATED: BG City Schools launch day has been postponed due to the heat