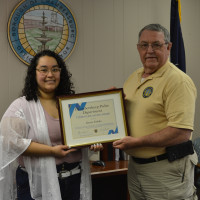 The Chambersburg Police Department would like to recognize Keren Toledo for her selfless acts on 3/3/2021 that resulted in the saving of a life.

On 3/3/2021 at approximately 622 p.m., CPD officials responded to the Henninger Field area for a Check the Welfare appeal. On arrival, a man was found in his car. He was quickly identified by officials as a life threatening diabetic. An ambulance was called to the scene and its blood sugar was found to be critically low (28). EMS staff were able to support the patient and assist him in his recovery.

CPL Jakubic contacted Keren Toledo, who was the caller for the incident. Toledo told CPL Jakubic that the first time she saw the vehicle was when it drove by. Her first thought was that there was only someone sleeping in the car. However, Toledo took note of the vehicle as it passed. When she came back a while later, she noticed that the vehicle was still parked in the alley and the male was still inside. She felt this was out of place. She alerted a friend and they went to the vehicle and checked the male inside. After speaking to the man, he seemed disoriented. She became further concerned and contacted the police.

Toledo’s actions contributed to EMS & police being called on site. CPD officials identified the male patient as being on the verge of unconsciousness and he was certainly unable to summon help for himself. Because of her actions, she helped save this man’s life from the severe diabetic condition he was in. If Toledo hadn’t taken upon themselves to investigate something they thought was strange, the result could have had tragic consequences.

The Chambersburg Police Dept. would like to acknowledge you for your immediate action and the necessary steps to call for assistance. Your actions illustrate what it means to be a good neighbor and a great citizen. Your friends, family, and the citizens of Chambersburg should all be proud! Award given on May 17, 2021.