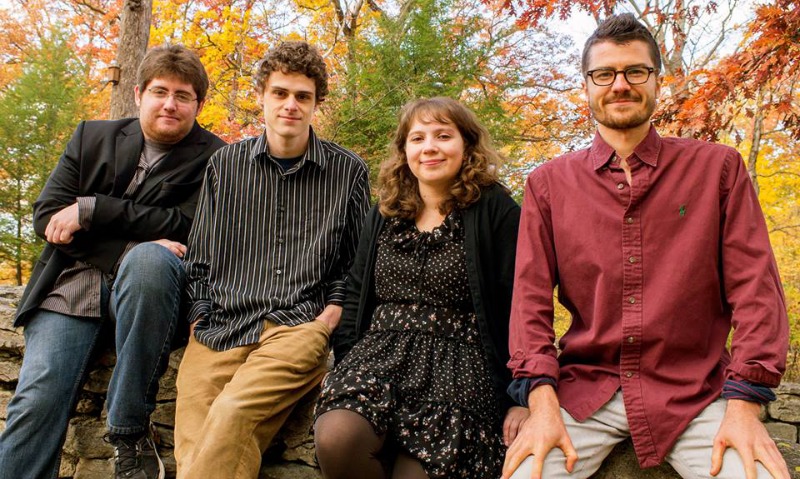 Estar Cohen is a young musician known for her unique singing styles, compositions and performances in public places in and around Toledo. Her parents, Allan and Donna Cohen, founded Happy Badger Cafe, which was a mainstay of Bowling Green from 2000 to 2012. Her older brother Ben is a founding member of the local experimental band Heavy Color. Currently a student at the University of Toledo, Cohen’s latest project, Waiting For Dawn, is a joint jazz album that includes many talented local musicians.

Waiting for Dawn is a community project involving several local musicians. How did the idea for this album come about?

When the band (Josh Silver, Travis Aukerman, Steve Knurek and I) decided to set a recording date, we’d been working together for a number of years. We felt it was time to document our musical process as an ensemble and to take on the challenge of capturing some of these compositions live in the studio. As a writer, I felt a desire to share some of my work with a larger audience, rather than just sharing the music with those who have the opportunity to hear the group performing live.

How did you choose your musicians for the album?

I’ve been fortunate to have worked closely with Josh, Travis and Steve since starting the Estar Cohen Project in 2012. I have the greatest respect for David Bixler, Ben Wolkins, Dan Palmer, and Corey Howe. Each of these musicians brought their unique personality to the music and I was sure that I wanted their voices on these particular pieces. I am so grateful for their collaboration and have certainly learned a lot from working with them.

You recorded for Big Sky in Ann Arbor. Was that a positive experience? Can you tell us something about the overall admission process?

This was my first full-length recording and I learned a lot from it, and I think some of my bandmates did too. We were on a budget which definitely made us think carefully about our methods and value our time. Our first session lasted about five hours and in those five hours we recorded each melody live two or three times. We wanted to capture a similar feeling that we create when we play a concert. After choosing the takes that would appear on the album, we decided to be pretty minimalistic when it came to layering or overdubbing. One of the big realizations I came to was how much time and effort is put into well-thought-out mixing and mastering of a project. As someone who is into music professionally, I am so happy to have gone home with a wealth of new discoveries. I am also very grateful to our Kickstarter supporters who provided us with their financial support for the inclusion.

There are lots of Jaco Pastorius-esque, sparse bass lines and experimental chord work on this album, but also traditional jazz and bop signatures. What are the main musical influences on Waiting for Dawn?

The main influences in my writing come from composers and poets who are great storytellers. One current modern jazz songwriter that I’m paying close attention to is a singer / multi-instrumentalist named Becca Stevens. What I love about Becca is her ability to draw you into another world through her lyrics and then illustrate that world through music. Last year I also got into the music of the pianist and vocal duo Ran Blake and Jeanne Lee. Her recordings of the standard jazz repertoire opened up completely new meanings to the melodies that I previously thought I understood well. If a musician can really highlight different colors of a piece to demonstrate a certain mood, that can be very special. No matter what style I write something new from, I always strive to tell a compelling story.

The lyrics focus heavily on the time that goes by and the loss. Can you talk about the inspiration for “The Good Life”, “Dreamer” or the title track?

In 2012, I lost my mother, Donna Cohen, to a rare type of cancer. Dealing with the loss of someone you really love is a theme that runs delicately through the album. In The Good Life we ​​enter a world where the main character of the song is very early after losing a family member. As the story progresses, we witness her making a hasty decision in response to the stress accumulated by the appearance of estranged family members, expectations of her religious background, and her own revelations in response to death. Dreamer is purposely more abstract and exists to lament the passage of time in hopes of finding a way to cope with its inevitability. The fear of the grieving process is particularly evident in Waiting For Dawn, a piece that aims to explore the feelings that are often associated with utter restlessness. Only in Praise do the texts demonstrate a feeling of acceptance of a considerable loss and thus a form of dissolution. I purposely placed Praise at the front with the other three songs towards the end of the album because I believe that it is a journey to understand the loss of a loved one, a journey that takes a lot of time and often means going through the darkness travel to find light.

What are your future plans? for the Estar Cohen project?

The band is currently planning performances to promote the album and debut new music as well. Our official CD release party will take place on December 5th at the Toledo Museum of Art in the Glass Pavilion from 6:30 p.m. to 8:30 p.m.

The album is currently available for purchase by visiting my website, the Estar Cohen Project Bandcamp site, or emailing my website to purchase a physical copy (which is available in person at shows, of course).