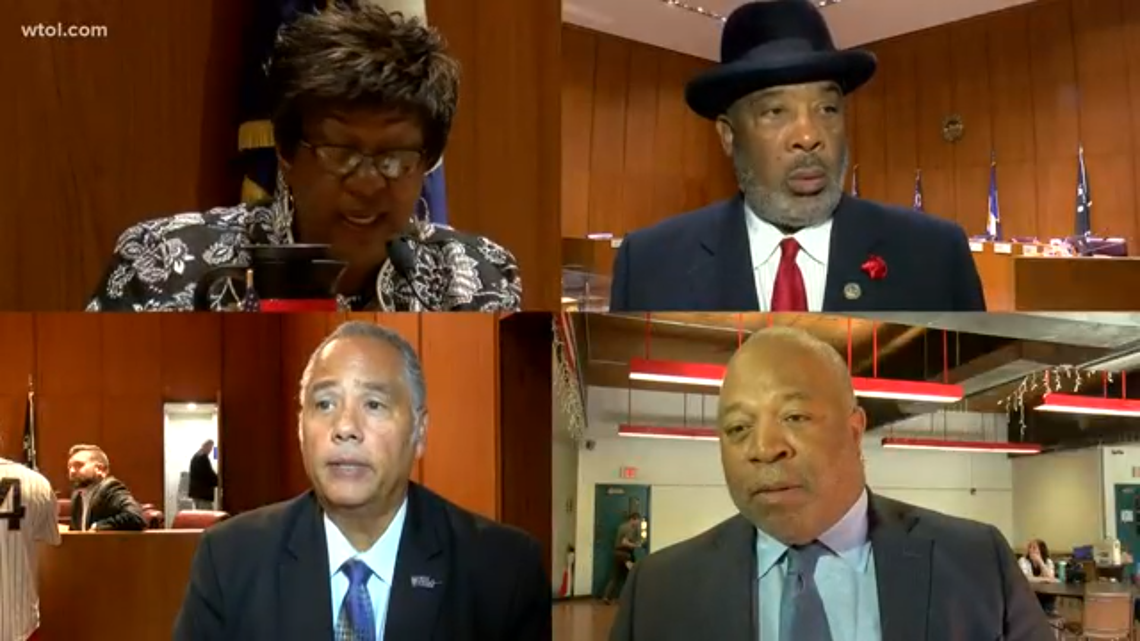 TOLEDO, Ohio – Four members of Toledo City Council and a local attorney are charged with participating in a bribery and extortion program that involved soliciting and / or accepting cash, checks, money orders, or other valuables from local business owners in exchange for theirs Votes promoted in the city council.

According to US Attorney Justin Herdman, the federal bribery and extortion charges provide for maximum sentences of 10 and 20 years in prison, respectively.

The filing in the US District Court North describes the alleged offense of “Receiving Bribes by the Agent of an Organization Receiving Federal Funding” and “Hobbs Act extortion under the color of official law”.

According to the affidavit, in 2018 the FBI began an investigation into Toledo City Council over soliciting or accepting cash, checks, money orders, or other valuables from local business owners in exchange for their votes on the city council.

The four council members appeared in federal court on Tuesday afternoon. Judge James R. Knepp II set them on unsecured bail of $ 50,000 each, which means they’ll sign a piece of paper saying they’ll pay that amount if they don’t show up. July 20 was provisionally set as the next court date.

The judge also ordered no contact with each other and with anyone involved in the investigation, restricted their travel to the Northern District of Ohio, and ordered them to undergo a DNA smear if requested. The court does not prohibit council members from participating in the advisory business of the city council, but private intercourse with those involved in this case is prohibited.

Johnson, as the reserve’s deputy sheriff and gun collector, was immediately instructed to secure and remove his firearms and ammunition. Sykes, Harper, and Riley said they didn’t have firearms.

It emerged in court that Harper had brought charges on top of the bribery and extortion charges. The third charge, which will be brought against her only, is an illegal interstate communications charge with intent to extortion, which carries a maximum prison sentence of 2 years and a fine of $ 250,000.

According to the FBI, at least three council votes were affected by the alleged bribes.

“It was also found that Harper hired a local attorney, Keith Mitchell, to solicit and direct their bribes.”

Mitchell is wanted by the FBI, according to a press conference on Tuesday afternoon.

According to US Attorney Justin Herdman, they are facing federal bribery and extortion charges.

Herdman said the sentences have a maximum of 10 years for bribery and the charge of extortion has a maximum of 20 years. Both charges come with a $ 250,000 fine.

FBI Special Agent Eric B. Smith asked anyone with more information about the allegations of bribery to call the FBI office at 419-243-6122.

The FBI cited confidential informants, taped phone calls, face-to-face meetings via text messaging, and analysis of financial, business and government records as sources for its investigation.

On Tuesday afternoon, the FBI also issued a search warrant on the 22nd floor of the One Government Center in connection with the four arrested councilors.

Toledo Mayor Wade Kapszukiewicz made a statement on Tuesday afternoon:

“I am shocked and heartbroken about today’s arrests. This is a terrible day for Toledo – and for all who believe in the good that can be achieved through public service.

“I was inspired to run for public office by a Catholic priest, Fr. Timothy O’Brien, who gave me the benefits of a life dedicated to the public good. Because of his mentorship, I have no tolerance for officials who trust the Abusing Citizens: One of the reasons Toledo has seen relatively little political corruption historically is that the public does not tolerate it either.

These councilors are entitled to their day in court and “until proven otherwise. I encourage all Toledoers to say a prayer for our city in the hope that justice will be done in this case.”

“Corruption of any kind cannot be tolerated and has no place in the government of Toledo and Ohio. I ask everyone to withhold the verdict until the investigation is closed. I pray that the state investigation into four councilors will be thorough and swift.

“Toledo’s legislature continues to work. Anyone who violates the public’s trust should be treated appropriately and under the full weight of the law. The other members of Toledo City Council and I are fully cooperating with the investigation and will work with the administration during this time to ensure our operations are not affected. “

DECLARATION BY THE OHIO-DEMOCRATIC PARTY

The state Democratic Party made a brief statement Tuesday morning:

“These are serious allegations. At the same time, everyone has the right to due process and their day in court.”

The county Republican Party released a statement and several calls for the arrest warrants served on the four Democrats in Toledo that morning.

“There is a culture of corruption in the Toledo City Council. Four Democratic councilors – including the executive director of the Lucas County Democratic Party – were arrested by the FBI in connection with a scheme of bribery in the Toledo city government.

“The Lucas County Republicans are urging the following immediately: (1) All four city council candidates should resign; (2) open elections should be held for each of these open seats; and (3) Yvonne Harper should serve as the Executive Director of the Lucas County’s Democratic Party. “

A search warrant was carried out on Tuesday morning in the home of Councilor Yvonne Harper of Toledo.

Agents were seen in the house on the 2300 block on Franklin Avenue, and the councilor was seen handcuffed in her driveway.

The officials took the councilor into custody.

Harper’s neighbor Vivian Myers described the scene and when she saw Harper being led away.

“I look up and can’t get up close because there are a lot of people there, but I saw a gentleman handcuff her and then they put her in the car and it worried me,” Myers said. “Because I think, ‘Well, what is she going to jail for?’ I was just talking to her – there was nothing wrong, so I didn’t get it. ”